Coming of Age: A Biker is Born Part Deux!

I spent the summer of 2013 in the back lot of Moto Thibault working as a motorcycle instructor for Sur 2 Roues here in Sherbrooke, Quebec. Honestly, I don't think I have ever been as happy about work as I was last summer. I was surrounded by motorcycles all day long. The sound, smell and feel of motorcycles on a daily basis was enough to keep me smiling. Hell, I didn't even mind giving Can-Am Spyder Courses! The cherry on top however was being able to give my youngest son his first ride on a motorcycle! One day in August my wife arrived as a surprise with the kids for a pic-nic during our lunch hour. Since my oldest son's coming of age, my youngest son's desire to give it a go had only increased over the last year. For those of you who may not recall, although little J love's motorcycles, he always did so at a distance. Now, for the first time, he felt brave enough to ride one with his old man. I couldn't have been more chuffed.


The vehicle of choice was a Sur 2 Roues school bike. More specifically, a 2015 Suzuki Boulevard S40. The fact that both boys would now have had their first real ride on a Suzuki motorcycle hasn't escaped me. Like my Serenity before, this Suzuki 650 was a real treat to ride and an especially great learner bike for anyone interested in starting out with a mid-sized cruiser. Furthermore, like the Yamaha SR400 there are many customization options to make the bike your own. It's low centre of gravity also makes handling with a pillion on back confidence inspiring. Despite being much shorter than his older brother, Little J had no problems finding the pillion pegs with his tiny feet. Trying to wrap his arms around my "one pack" on the hand proved more challenging.

Before long, we were off at a nice steady and slow pace. I could hear little J chirping in the background. To him, anything past walking pace is really fast. He was howling in delight as we passed Jennifer and his siblings, calling out their names and saying hello each time. I could feel his little pudding hands clutching my "spare tire" as we weaved in and out of school cones. Truthfully, he is so light and small that it was like riding solo. "Go Faster!" he would occasionally shout. I'd oblige by gently twisting the throttle just enough to make the bike lurch forward. This resulted in another squeal of delight. His excitement was intoxicating. As always, Jennifer caught the event on video with her cell phone; a Galaxy Samsung SIII. 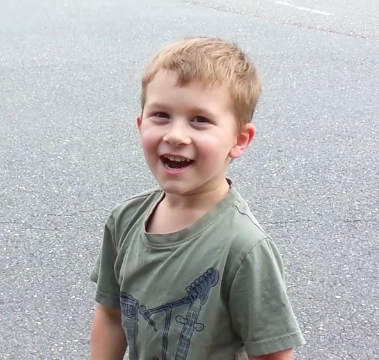 For little J, he had taken his first steps towards being a true biker. Upon descending from the motorcycle he exclaimed triumphantly that he had fun. Admittedly, I am no closer to being father of the year than I was the year prior when big J took his first spin with me. But than again, it isn't about being a perfect dad. Sometimes, the only thing you can, or should do is just spend time doing the little things with them. It doesn't hurt that those little things can sometimes be something awesome like riding around on a motorcycle! As it would happen this would be one of the last days of work for me at Sur 2 Roues before my return to servitude in academia. Though there were many reasons to love this job, this was the icing on the cake. As I waved goodbye to my family I couldn't help but look forward to the day that my baby daughter was old enough to embark on her first ride with me into motorcycledom...
Posted by Mario RJ Corbin at 1:37 PM