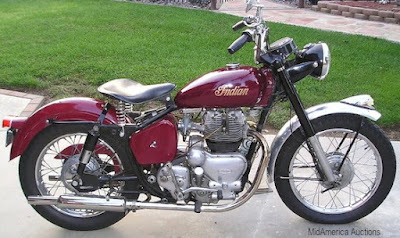 According to Classic-British Motorcycles, the failure of Royal Enfield to survive as Indian Motorcycles in the United States had less to do with the reliability of the motorcycles itself but perhaps, rather due to the financial status of the Indian Motorcycle Company. Check out RE Indians website for full specs of all the above models including pictures I am sure the majority of you have yet to see! Let's face it, Polaris is doing an amazing job with their new lineup of Indian Motorcycles. In fact, despite my initial impressions of the 2015 Indian Scout, I keep being drawn back to the marque. The new Indian Scout is pretty impressive but I keep finding myself wishing that it had kept its original style and look. (pictured right)

My search for Mr. T's Replacement has been long and frustrating. I have since even looked at the 2016 Honda Africa Twin, Scrambler Ducati and the Yamaha XRS 700. However, I tend to be drawn to bobbers and classics. Add to that the dream of owning an original Indian (you know what I mean!) and well, this may be the perfect compromise.

Pictures © RE Indian
Posted by Mario RJ Corbin at 8:06 AM