Choosing Mr. T's Replacement can only be described as a lifetime of waiting as I finally came to an important decision today. I put a down payment on a bike that I had given up on ever buying because frankly, at its regular price, it was out of reach. Even more so, had you asked me after selling The WidowMaker if I would ever own a Moto Guzzi again I would have said probably not. However, Piaggio has helped Moto Guzzi come a long way and the V7 range is no exception. It shares the same bullet proof 750 transverse V-Twin as my former Nevada, but has been upgraded with over 70% new components since 2013. Moto Guzzi has enjoyed a resurgence in popularity over the last decade. Add to the fact that thanks to Moto Guzzi's new lineup of V7II's to hit dealerships in the next few months, they discounted their present lineup and voila, you are now looking at the very excited and very proud owner of a Moto Guzzi V7 Racer whom I believe I shall aptly name Bella. Don't take my word for it, just ask Jamie Robinson... 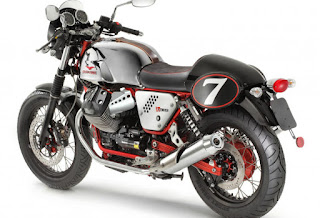 I bought my beloved Bella after five years of ogling her. She is to me what a 57 Chevy Bel-Air is to car enthusiasts, only better as I prefer two wheels to four. The Moto Guzzi V7 Racer is a remarkable embodiment of a motorcycle company and a piece of history not unlike that of Royal Enfield, Harley-Davidson, and thanks to Polaris, Indian Motorcycles. The V7 Racer is the flagship of a company located in Mandello del Lario and has been in continuous production since 1921. Unlike other Italian brands, it is still produced in Italy at the little plant that continues to inspire the hearts and dreams of so many motorcyclists around the world. 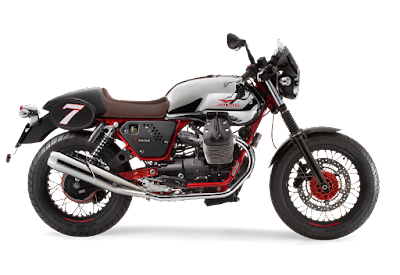 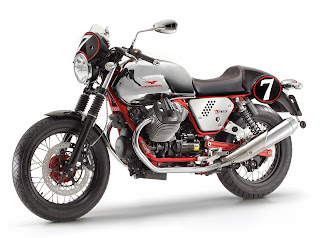 So why the Guzzi over my other considerations? Simply put, the little Guzzi ticks all my boxes. At 395lbs with a 5.8 Gallon/22 litre tank (500 kilometre/300mile range), shaft drive, ease of wrenching including valve adjustments and retro classic authenticity; what more could I ask for? Oh, price of course! Originally priced at $10, 590 (excluding taxes and shipping), Rock Moto Sport was selling Bella at $8, 495 (excluding taxes and shipping)! Thus, I bought a new bike at a used price! Viva l'Italiano... My only complaint is that I have to wait until May 2016 before picking her up! Thus, the next six months may prove the most unbearable yet as I await to take possession of my beautiful Bella! Until then, I will have to re-watch Jamie Robinson's adventure to Big Sur as he takes to the open road on a his very own Moto Guzzi V7 Racer!

Special thanks to Michael Oborne of Rock Moto Sport here in Sherbrooke, Quebec!
Posted by Mario RJ Corbin at 4:26 PM