A Short Review of a Short Book: Richard Georgiou's (How Not To Do) A Lap of Ireland: Mud, Sweat and Tears 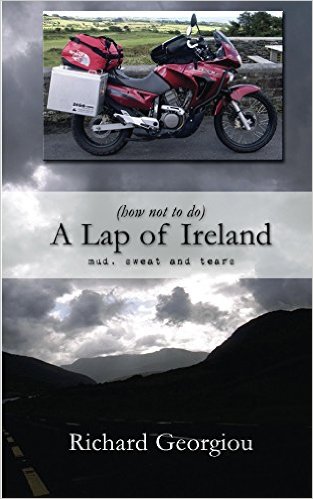 "I suppose this small book is about me getting the 'motorbike adventure' bug, passing my motorbike test and going on a trip to Ireland. It's also about how not to do a trip to Ireland. My propensity for disaster sometimes overwhelms me; however, the places I get to see and the experiences I'm left with are nothing short of life changing. I've decided to give this book away for free for two reasons, the first is that it's short, the second is that I hope you'll like my writing and travelling style and will then buy my "One Man on a Bike" book."

If you prefer a Kindle version or a hardcopy via Amazon click here!
Prices range from 0. 99 to £2.75

A Short Review of a Short Book


"A few minutes later the heavens opened. To simply use the word rain would not do the phenomenon justice; it was like being at the bottom of a waterfall. I did my best to continue riding but the view through my visor had all but disappeared. I struggled on until I saw a few large trees overhanging the road. I pulled over and stopped. The trees afforded me a little protection from the wind and rain but not a great deal. I was still getting wet and I was still miserable. With my visor completely misted up I removed my helmet. Not two seconds after it had slid off the top of my head, a van flew right through the large puddle I was next to and completely covered me in dirty water and grit. This was not the motorcycle nirvana I had imagined."

In 2004 Ewan McGregor and Charlie Boorman inspired a new generation of middle-aged men to seek out adventures on a dual sport motorcycle. The Long Way Around was endearing, if not slightly pretentious in its approach to travelling the world on a motorcycle. After all, motorcyclists had travelled the uncharted parts that Ewan and Charlie had visited without two support vehicles, let alone a dedicated camera man on his own BMW motorcycle. Inspired by the aforementioned motorcyclists Richard Georgiou's A Lap Around Ireland: Mud, Sweat and Tears can be described in two words, short and sweet. The twenty-three pages are an honest description of what every all-weathered motorcyclist has gone through at some point in their journey on two wheels. From attempting to get your motorcycle license to that thrill that we have all experienced when we set off on our own for the first time, if not every time, into the wild on our trusted steed.

You genuinely feel Georgiou's sense of excitement, angst and even desperation as Ireland's weather attempts to wash him and his Honda Translap away. Having commuted on a motorcycle daily in Ireland for the better part of a decade, I found myself transported back in time as I could empathize with what Georgiou was going through. I read somewhere once that it rained for more than 250 days a year in Ireland, thus, I can honestly say that I was not at all surprised at his misfortune. The torrential downpours, the wet crotch, the mud and even being splashed by passer-by's. His short novel introduces potential bikers to the joys and tribulations of motorcycling and is a reminder of how humbling an experience riding actually is. For better or worse, motorcycling puts the rider squarely in the thick of life unprotected or hidden by a metal cage. You experience all that the environment has to share with you. It is the type of experience that weeds out the fair-weather bikers from the all-weather bikers.

If there was anything that could be critiqued about Georgiou's work is that at times it was too short, too sweet. Twenty-three pages is a chapter in most books and though I enjoyed his narrative, it felt more like a ride report than a book. The latter is not necessarily a bad thing, however, what I am trying to say is that I found myself wishing he would elaborate on some of his experiences more. Perhaps I am feeling nostalgic partly in lieu of the noticeably absence of snow in my neck of the woods this year. The weather has been similar to Ireland's and for that reason I have found myself missing that damn wet muddy country. Regardless though, Georgiou has a reflective and easy to read style that keeps us glued to each page. His new book One Man On A Bike: England to Sahara and Back promises to give us more of that Georgiou wit and charm that I am sure will make him successful in his writing endeavours.

This book is about my month long, 10,000 mile, solo motorbike trip from Buxted in East Sussex to southern Morocco and the Sahara Desert and back. Along the way I meet interesting people, a thief, a number of policemen, a very sweet donkey, a large mountain range, a suicidal black bee and a scorpion that fell from my ceiling.

I rode through France, over the Pyrenees and through Spain, over the Gibraltar Strait and into Morocco, west to the coast, south to Rabat and Casablanca, inland to Marrakesh, over the High Atlas Mountains to Ouarzazate, then to Zagora, Erfoud, Errachidia, Merzouga and Mhamid. Oh, and back again.

I experienced the phenomenal 50 degree heat of the Sahara Desert in the summer whilst wearing thick, black motorbike leathers, I saw sights that will remain in my heart forever, I ate a dinner that left me with a bottom like a red hot bullet hole and I rode through rain like you’ve never seen before.

So, why not join me for my adventure of a life time and enjoy my humour, my propensity for disaster and my lust for laughter.