Is It A Bike? Is It A Motorcycle? Is It A Scooter? It's A Phantom!

"Justin Bell joins Jay for a motorized bicycle race of epic proportions, pitting John King's touring model against his racer. Who will be the victor?" - Jay Leno's Garage 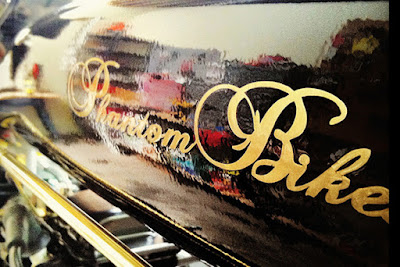 "Taking a beach cruiser bicycle and mounting an engine in it. Searching the internet to find things that I would need, I noticed that this was not a new idea at all. I saw what was out there and said, “I can build a better bike.”  - Phantom Bikes

The idea of sticking an engine into a bicycle frame is as old as Royal Enfield itself. Heck, I plan on doing something similar for a class that I wrote and teach titled Zen & The Art of Motorcycle Studies (stay tuned) at a local cegep in Quebec! However, there is a difference between slapping an engine into a bicycle frame and creating something truly unique, tasteful and dare I say awe inspiring?! John Allen King, president and owner of Phantom Bikes, made something old new again and in doing so created a sub-culture of motorcycling in California and abroad.

What's more is that for budget minded folks you can buy a DIY kit from Phantom Bikes. The latter consists of everything that you will need, including one of their rust free aluminum hydro form frames and an engine all for $1, 500 USD. If wrenching isn't your style, than you can purchase complete bikes ready to ride for $2, 800 USD.

With the world finally going green and Canada's new Prime Minister, Justin Trudeau, promising that Canada will do its part in helping lower Green House Emissions in a land mark agreement in Paris earlier this year, maybe the Phantom E Vision is more up your alley!? The fact is, anyone with an ounce of intelligence knows that the technology exists to make electric motorcycles viable. Whether or not the powers that be will ever allow said technology to come to its full fruition until every last drop of oil has been exploited on Earth is another debate for another day. In the meantime, however, the Phantom E Vision allows us to wait in style as the rest of the world slowly grows up!


Haters are going to hate. However, for us romantics out there, Phantom Bikes are a glimpse into the humble beginnings of motorcycles. What is more is that though the initial cost may seem high at first, let's face it, accessories and detailing will be a cinch when you compare the cost of spoiling your Phantom Bike with that of regular sized motorcycles. Whether you decide to bar hop on your Phantom Bike or go across country, no one can deny that you would be the talk of whatever town you rode through.


If I hadn't already bought Bella recently and was in the market for something different, something that would look as good adorning the wall of my living room as it does the streets of my home town, I wouldn't hesitate to pick one of these bad girls up! Still not convinced yourself? Check out there website below and contact them directly: