The only thing better than buying a new bike is buying accessories for said bike! A task easier said than done when it comes to Bella given that she is absolutely stunning as is. Take too much off and well, she isn't a V7 Racer anymore. Add too much and I may as well throw some Christmas lights on her. Finding the right balance is going to be a challenge to say the least. That being said, here are some of the goodies that I have set my eyes on.

The first item on my list was a real point of contention for me when I first came across the Moto Guzzi V7 Racer. Unlike the Triumph Thruxton, the V7 Racer has no pillion pad under her rear cowl. Nor does she come with passenger pegs for a pillion. I understand why Guzzi went this way and can even appreciate their stance - the Guzzi is for the solo rider, the wanderer. Bitches be damned! However, despite applauding their audacity, what does irk me is that should you come to the realization that you may wish to take the love of your life (read: wife) for a quick jaunt you will have to purchase the Café Classic "High-Mount" Passenger Peg Kit (pictured left) which will run you $339.40 USD before taxes. The price would be forgivable if the aesthetics of the high-mount passenger peg kit match the style of the V7 Racer. They don't and I won't! 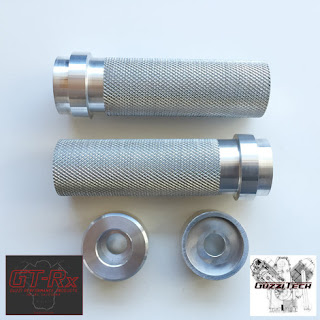 Instead I came across these beautiful Limited Production Custom-Machined GT-Rx® V7 Racer Passenger Pegs (pictured right) from Guzzi Tech via their forum a year ago. Pros: Not only do they work with the existing V7R's hardware, but they are an easy on/off solution. What is more is that they actually match the front pegs thus maintaining a nice uniformed look front and back (see pictures below). They match the quality of the rest of the bike. God forbid the bike should ever fall but in a way these will act as frame sliders. Cons: They are not foldable. Also, I cannot imagine that they would be comfortable for extended journeys in lieu of having no rubber inserts to protect against vibration. Final Verdict: If your thinking the cons outweigh the pros and are ready to accuse me of being fashion conscious - remember, I bought a V7 Racer. Of course I am fekking fashion conscious, at least with this bike! However, in some strange and wonderful twist, for once something pretty doesn't have to cost a fortune. These retail for a whopping $99.00 USD! You can't go wrong imho. Furthermore, Todd at Guzzi Tech is great and has already posted them today! Yes, I bought them already. For that price, why wouldn't I? Should the day come that the missus wants to ride across the planet with me on two wheels, I'll invest in a Honda Africa Twin!


AF1 Racing sells this nifty Mistral Headlight Guard For Moto Guzzi V7's. "This Italian made stainless steel headlight guard is reminicent of the early days of true cafe racing where a broken headlight meant a costly DNF (did not finish)" (AF1 Racing, n.d.). Ok, so the V7 Racer isn't the quickest bike on the road, so who am I trying to kid? Nevertheless, the Pros: Living in a rural(ish) area I have been sprayed by trucks and cagers with gravel from time to time. The headlight guard provides protection for my headlight.  Also, lets face it. It's pretty darn cool looking on any bike imho. Best part is that it costs only $59.99 USD from AF1 Racing. That is cheap in comparison to other companies selling a similar item. Cons: Do I really need one? No. But for such a low price, I can't help myself. Final Verdict: How can I justify not buying it? It's practical and looks great.


Having owned a Corbin Motorcycle Saddle in the past when I owned Serenity, a Suzuki Intruder 1400, I cannot think of any other saddle that I would want. Do not get me wrong, the saddle on the V7 Racer is beautiful. However, it's made of suede. Not great if you are caught in the rain. Apparently there is a rain cover under the cowl. But lets be honest again, have you ever sat on a stock saddle that didn't need to be changed or improved upon? Reviews of the OEM Alicante Suede seat is that whilst beautiful and comfortable for short jaunts, anything longer than an hour will result in bum hurt. So changing the saddle was always going to be an expense that I would have to factor into buying a bike, any bike, for that matter.

Pros: A Corbin seat is extremely comfortable and easy to maintain. I have no doubt that I would enjoy it and it would provide me with decades of riding pleasure and ease. Cons: However, I have to confess that I am not enthusiastic with Corbin's take on the Moto Guzzi's  Gunfighter & Lady saddle. As you can see, the rear of the saddle is way too high and doesn't seem to fit the lines of the bike. I am surprised because they made more options for the Triumph Bonneville. Oddly enough, the same saddle for the V7 (pictured right) is more expensive than for the Triumph? Oh, did I mention that the rear cowl isn't compatible with any Corbin seat?! :-(

The customer service representative wasn't very helpful either. When I owned my Intruder, they seemed to be intuitive about my needs and made my requested changes accordingly. However, this time they were arguing that the seat may not fit my bike despite the fact that the seats for the V7 range are all interchangeable. Furthermore, she had not idea what I was talking about when I asked to have the rear pillion part of the seat lowered and my seat height increased to standard. At just under $500.00, I don't think that is too much to ask for?!

Final Verdict: I just want a Corbin seat that looks like a traditional two up Moto Guzzi seat. Not least of all because at 6' feet tall, I don't want to be any lower than necessary and their present Corbin saddle is actually lower than stock. I have read that the Moto Guzzi Gel Seat wasn't much better than stock either. Thus, I guess I will try again with Corbin in a month or two. Maybe I just called on a bad day. They do offer a seat that looks exactly like the one that comes with my bike. However, that defeats the purpose of two up riding, not to mention a tad redundant. If anyone knows of an alternative that is actually just as comfortable as a Corbin seat, don't hesitate to let me know!


Honestly, I have never been a fan of engine guards. Though, given the Moto Guzzi's unique engine design it does call for them. There are not many options available for the Moto Guzzi V7 either that respect the overall lines and look of the bike. That being said, there are frame sliders available from AF1 Racing. I was prepared to buy the latter until I came across 70 Tre's protection cylinder head crash bars made ​​of steel. They bolt right into the jugs. Pros: They are stylish yet practical and do not detract from Moto Guzzi's Transverse V-Twin. They offer protection should the bike ever be dropped or worse. Cons: Being bolted directly into the jugs begs me to question whether it may cause internal damage (where they are screwed in) should the bike ever slide in an accident?! But what do I know?

Final Verdict: I love the look and practicality of these engine guards. I need to contact 70 Tre and ask for more information. Though the price is high in comparison to traditional engine guards for my bike, they are roughly comparable to frame sliders. So who knows, I am still on the fence. Given that they were designed to take a fall, they may be worth it. At this point, the thought of even putting a ding into my tank is upsetting, let alone dropping it or being knocked off for some reason. In any case, what do you think? Have you tried anything else? Let me know.


I have always loved tank racks. They are reminiscent of a time when motorcycles were used for more than a Sunday spin. 70 Tre has created this lovely tank rack that works in conjunction with the tank strap of their own design (see below). It essentially bolts into the same place where the traditional leather tank strap fits. The bottom half is secured via 70 Tre's version of the V7 tank belt. Pros: The tank rack provides protection for the top of your tank. If, like me, you don't like saddle bags, this means valuable cargo space on the top of the rack via a tank bag. Cons: The tank rack and belt strap are sold separately (cheeky). 70 Tre is an European based company, hence, the currency exchange for such a simple item makes it kinda pricey.  Also, it only comes in black.


Final Verdict: Maybe in a year or so when I have a moment of weakness?


I know, I know. It's not a scrambler. However, as I stated above, the last thing I need is something to fly up and damage my baby. Perhaps I am being over protective. I don't care, she is my baby and I can spoil her if I want to. BAAK Motorcycles makes a simple skid plate (pictured left) as does MG Cycle. There are not too many options out there. Pros: Protects the underbelly of my bike. Cons: May not work with a center stand?! Final Verdict: The jury is out. Time will tell. The Moto Guzzi Garage has been coming out with some fantastic kits and ideas. Though, surprisingly, a working skid plate even for their "scrambler" version doesn't seem to be one of them. Maybe this is overkill. I don't know. I could save the money and use it for a proper center stand or something else. Does anyone have a skid plate on their own V7? If so, share your thoughts.

In the end these are some of the basic accessories that I have been looking at. I know that there are so many more interesting and exciting pieces to choose from, including the Dapper Bar End Mirrors (pictured right) for instance. However, as already stated, I am struggling with maintaining the V7 Racer aesthetics whilst trying to make it my own. I have actually been thinking of buying a second OEM V7 Racer saddle so that I can send it to Corbin and have them re-make it the way I want it. This would allow me to add or remove the rear cowl with ease. There are many other accessories coming out from Moto Guzzi too that are little touches that would add to the eye candy of the machine. That being said, should anyone ever find themselves in doubt as to what to buy me for next Christmas or my next birthday (hint hint Kitten), at least you have a working list to go by! In the meantime, let me know if there are any goodies out there that you have personally purchased and enjoyed!
Posted by Mario RJ Corbin at 4:39 PM