The Highs and Lows of Becoming A Tattoo Artist!

I am not going to lie. The road to becoming a tattoo artist has had its highs and lows and though I find myself discouraged at times, I can say that I have enjoyed learning the a to z of tattooing. Though I have always had a dose of healthy respect for good tattoo artists, actually putting needle to flesh has made me realize just how talented these people really are. Best described as part painter, part sketch artist with a touch of calligraphy for good measure, getting used to just holding the tattoo machines has been a challenge in its own. It's easy to forget that you have to use it in just such a way that the needles are making proper contact with the pig skin and in doing so, creating a proper line. However, to begin with, I underestimated the availability of pig skin in Sherbrooke! Adding to the oddity of my dilemma, when I did find some available pig skin, it was at Le Marché Végétarien on King Est in Sherbrooke!

Why would a vegetarian supermarket sell pig skin, you ask? It's a question I asked when I approached the butcher's counter. I had called her on a Wednesday and was told to drop by Friday in the early afternoon. They have an assortment of meat on sale ranging from pork (obviously) to beef. Admittedly, the answer to my question wasn't satisfying. It's a boutique food market, I was told. But it's called a vegetarian market, I replied. They laughed in that way when a commoner doesn't understand the humor of the upper class. Adding to the curiosity was when they came out with a box with my pig skin in it. I had asked for 12 pieces of pig skin. My conversations with Todd gave me the distinct impression that if I explained to the butcher what I needed, that the pieces of pig skin would be prepared in perfectly cut up pieces ready to be tattooed. I was wrong. Think jigsaw puzzle. I could have made my own pig suit. And to think, I very nearly went to pick up the pig skin on Bella, my Moto Guzzi V7 Racer. Fortunately I had the car. With the pig skin duly placed in the boot (trunk) I proceeded directly to Todd's place where he very kindly allowed me prepare the pig skin in usable pieces for tattooing.

For the record, I use to work as a patient care attendant (orderly or nurses aid depending on where you hail from) in various hospitals in Montreal. My duties included but was not limited to changing patients' diapers and assisting in cleaning sores and abscesses. Though it was a nauseating experience at times, it does not compare to having to cut up pig flesh. I felt like Dexter Morgan disposing of a body. After all, who would argue that the humanlike flesh in my hands being sliced into 30 perfect slices wasn't from a pig? So realistic is pig skin to human skin that I am not ashamed to say that I thought I was going to be ill at first. Eventually I got past it and went about the task of disposing of what was left of this once intelligent and sweet animal. Admittedly, however, I haven't eaten pork since. With all 30 pieces properly wrapped in cellophane, I placed them neatly in Todd's freezer.

My first day officially tattooing with Todd was pretty great. He had booked the day off and we set about our respective tasks. He, the diligent and informative teacher whilst I tried hard to be a well behaved student. I'm not going to lie, the technique is lost on me and whilst I have improved slightly with my lines, inevitably I find it difficult to set my mind to the task of visualizing the design on the piece of pig skin. Unlike other artists including Amy Gillet's wonderful rendition of Johnny Depp's Captain Jack Sparrow, I could barely get my shading to do what I wanted it to do. With the exception of a small Garfield and later at home, Lucy from Peanuts, the rest were just scribbles in an attempt to make straight lines. As it stands, I can connect the lines and go over the same line twice. According to Todd, that's a good start. I think he's just being kind. 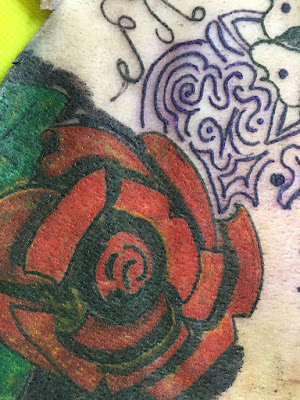 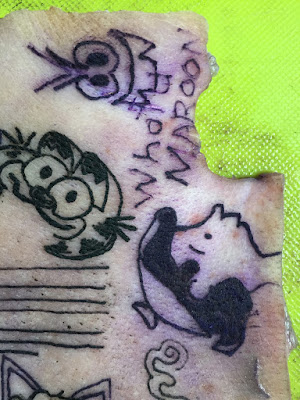 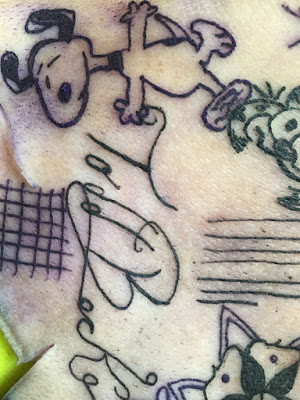 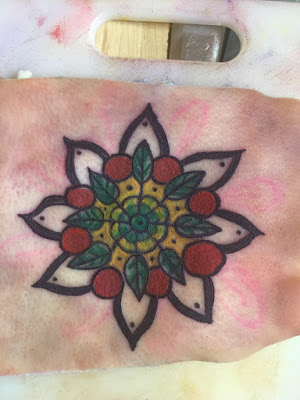 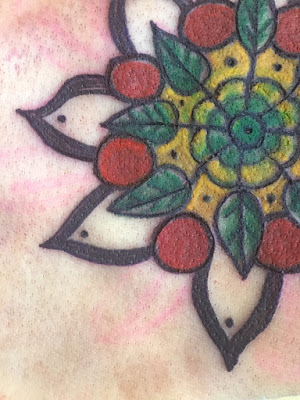 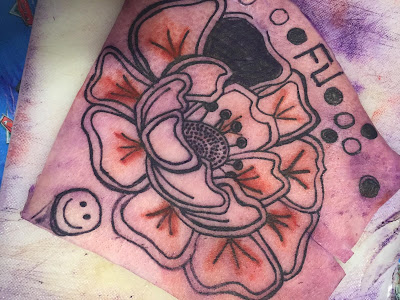 Attempt No. 1 was partially completed at Todd's shop. I tried not thinking about things too much as I find that the harder I try to make a straight line, the more crooked I draw/tattoo it. Attempt No. 2 was actually drawn onto the pig skin by my wife, Jennifer. She used a sharpie and honestly, whilst she did a great job making a mandala pattern, the sharpies themselves were not able to draw directly on the pig skin very well. Still, I managed to use what she could do and completed a decent outline of her mandala. I then proceeded to screw it up with my craptastic attempt at shading it in with colour (*sigh). Attempt No. 3 was completed using a Tattoo colouring book similar to the one by Megamunden. I simply looked at the flower design and proceeded to tattoo it directly to the pig skin. It ended with my telling myself to fuck off as evidenced by the FU on the top of the tattoo.

You don't have to say it, I already know. I recognize my mistakes, I also understand that when it comes to shading, I am being too impatient. I also understand that I am pressing too hard at times, especially with the shader. I need to be more patient and I need to also practice much more than I have been. In truth, like with any new skill set, I should be practicing daily. I will be picking up some carbon paper to try and get some pattern printed onto the pig skin in future. Whilst not ideal, it will give me a proper reference not unlike with my second attempt above. On Thursday I get to meet up with Todd again who will be showing me the finer techniques of shading in person! He has already told me about the lining technique illustrated by Ldli LaVonne. Should you have any constructive recommendations and advice, by all means share!