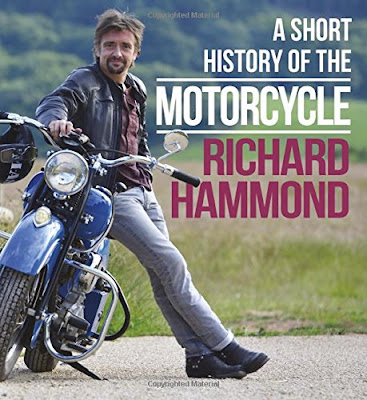 I'll be teaching Zen and The Art of Motorcycle Studies this autumn again and decided that in addition to the late Robert Pirsig's book which the course itself is named after (just replace 'Studies' with 'Maintenance') I also decided to include another book by Richard Hammond of Top Gear fame. Whilst Hammond has since moved on to bigger and debatably better things in the form of The Grand Tour and Drive Tribe with his lifelong friends and co-hosts James May and Jeremy Clarkson, it's nice to see that he still has time to publish a book or two every now and then. Unlike Top Gear, Drive Tribe allows room for more than just exotic cars as motorcycles are given their dues. Not surprising really given that both Hammond and May are avid motorcyclists, both boasting a collection that the majority of folks like us can only dream of. Hammond's newest book, A Short History of the Motorcycle is a testament to his love of two wheels and in keeping with his target audience, provides plenty of pictures too. That is a good thing. Me likes picture books. 😜

Since BBC decidedly gave Clarkson the sack (whether you agree with why he was fired or not matters not) the once British staple of television has had its difficulties remaining in top gear (pun intended!). Hammond, May and Clarkson managed to make Top Gear an international sensation. They were to each other what Moe, Larry and Curly were for Americans. Only, the Brits managed to do with words that slapstick accomplished for the Three Stooges. Their commentary and discussions on obscenely overpriced machines made the show oddly titillating. Perhaps it was a combination of those lovely accents mixed with a dry sense of humour, the occasional ribbing of one another or perhaps, maybe, just maybe, the three of them are rather magical together. BBC's replacements of these three lads as hosts for Top Gear in the form of Chris Evans and Matt LeBlanc leaves something to be desired. On their own, Hammond, Clarkson and May are just men. You may like one of them individually more than the other. But that being said, right or wrong, there is no British Stooges without May and Hammond to help temper Clarkson. I digress.

Whilst Top Gear never bothered to showcase two wheeled machines like they did Porsches, Lamborghinis, Aston Martins, and Mercedes (to name but a few) one could never help but wonder how The Stig, let alone Hammond and May, would have reacted to test riding the Kawasaki H2 or riding through the Himalayas on a Moto Guzzi Stelvio. A fact which has since been rectified with Drive Tribe thankfully. Thus, if you enjoy the way that Hammond speaks then you should very much enjoy his newest book, A Short History of the Motorcycle. It's written in such a way that is less as though he barricaded himself in a panic room and feverishly set about the task of writing a book, and more like that, whilst speaking with May one fine British evening, he decided to record himself and later pay someone to transcribe his thoughts on paper. There is nothing wrong with this approach, as I own a video and book series by notable zoologist Desmond Morris. With very minute differences, Morris' books are the literal transcriptions of his videos. However, if you have never heard of Hammond or if you are not British, or at least not familiar with British parlance, I highly encourage you to watch a couple of episodes (if not seasons) of Top Gear before reading this book. You see, one needs to read this book with Richard Hammond's voice in their mind. It adds to the overall enjoyment of the book and makes you feel like you're actually at a British pub having a pint with an old friend.

I am sure if Hammond were in front of you that he would let you interject from time to time. Because that is the kind of guy he is and the kind of book that you will be reading. For example, when Hammond writes about how "some bright spark suggested that Hells Angels should be used as security at the Altamont free rock festival in 1969" (Hammond, 2017: 100) I found myself speaking aloud that it was in fact, to my recollection, the Rolling Stones who came up with the idea. At that particular time in history Sonny Barger had made them slightly respectable in the American public eye because in 1968 they went on National Radio offering their services to President Lyndon B. Johnson of the United States of America to fight in the Vietnam War. Naturally, the Altamont incident returned the adoring public to their former perceptions of the H-A.

Hammond's book is riddled with little tasty bits of motorcycle history and terminology. For example he devotes an entire chapter to the first motorcycle yobbo (a total of one page)! What's a Yobbo you ask? He never really defines this for his non-British cousins abroad. However, the word crops up again when describing the behaviour of certain groups like the Hells Angels. Yobbo, short for Yob, means a rude, noisy, and aggressive young man. Plenty of those around the world, the majority of which whom do not even own a motorcycle I might add. Some may argue that Clarkson has acted like a Yob in the past. But perhaps he is too old to be considered one now? All I know is that I have had the displeasure of teaching plenty of yobbos over the years.

At just 202 pages long, Hammond covers the entire history of the motorcycle in a blink of an eye. Because of his aforementioned writing style, you could easily finish the book in a day if you are the kind of yob that expects your wife/husband/children to do everything around the house whilst you sit there yelling at them to quiet down whilst you read and enjoy your new book. Some of his chapters are only one page long (i.e. The First Motorcycle Yobbos?), well, two if you count the picture. The pictures are rather beautiful and the book is pretty much what it says on the cover. Which is both its selling point and perhaps greatest problem. Whilst having your reader wanting more is generally considered a good thing, at times Hammond is just too brief in his examination of any one topic. The section on bike films for instance only speaks of Easy Rider (1969) and On Any Sunday (1971). Whilst both films are indeed prolific to the world of motorcycling, other films including The Motorcycle Diaries (2004), Riding Solo to the Top of the World (2006) and One Week (2008) also contribute to the cultural fabric and meaning behind motorcycling. In fairness, whilst he does allude to the importance of The Wild One (1953), it feels like his personal opinion of the film undermines the cultural significance of it. Naturally there are more motorcycle related films that should be mentioned but this is a review and not the definitive addendum to Hammond's book. 😉

I should make a correction. Hammond does spend quite a bit of time looking at the world of motorcycle racing in its various forms. Clearly a devoted fan of the latter, he hails to the greats in gusto. From Barry Sheene and John McGuinness to Valentino Rossi and Casey Stoner, Hammond speaks of these men with great affection and in doing so, manages to infect his readers with the same enthusiasm for the topic. For someone like myself who is not very knowledgeable about motorcycle racing, he provides just enough information to help you make polite conversation at the Isle of Man TT but not enough to be a definitive expert in the field itself. I have never had much interest in watching sports on television, with perhaps the exception of the TT races because of their sheer ludicrosy. Hammond has got me searching for clips of Moto GP on youtube and that is saying a lot.

If you are one of the million who commute by public transportation, this is the perfect carry along. The pictures are particularly beautiful and his narrative of the short history of the motorcycle is both engaging and entertaining. He clearly has great affection for James May as he insults him every now and then (a general means by which the male of our species, homo sapiens, proclaims affection, if not love or respect or both, for the same sex) making you feel as though you are watching a classic episode of Top Gear, but only better because this time it's about motorcycles. Whilst I think that Hammond could have developed certain topics further, inevitably the book is a coffee table book written out of a genuine love for motorcycles and not some desire to educate the world vis a vis a doctoral program at a distinguished British university. If it were, I'd be signing up for my PhD today! No, Richard Hammond's love of motorcycles is infectious and genuine. He didn't write this book to make money, he doesn't need too. He is rich. Rather, it's clear that the book is a giant love letter to the motorcycle as a whole itself including how it has shaped his own life and the lives of millions of other bikers in all their forms, be they part of the 99%'r or even 1%'r crowds. Thus, whilst the title of the book is not technically misleading, a more suitable title would have been something along the lines of Richard Hammond's Love of Motorcycles or better yet Ode To Motorcycles: A Love Letter By Richard Hammond. Either way, it's a fun little read that will leave you wanting to find out more about various aspects of motorcycle history, marques and generally anything to do with two wheels. There's nothing more to say other than "that'll do Hamster, that'll do.

This review was completed by yours truly without compensation. Nor was I approached by Richard Hammond or his publisher to write said review. Furthermore, I have made no money from writing this review. Like Mr. Hammond, I have a genuine love affair with motorcycles and think his book will make the perfect introductory reading material for my students this autumn. If Mr. Hammond should read this review and would like to be a guest speaker for my class (by SKYPE or even come down to actually speak to my students in person): Zen & The Art of Motorcycle Studies, I could promise him a home cooked meal, some good conversation and possibly a pint or two of the brown stuff that the Brits seem so fond of.

Would you like to be a Guest Contributor?
Say What? is always looking for quality contributions.
Share your adventures with us today!
Posted by Mario RJ Corbin at 1:47 PM