Installing a Phatmx Carburetor on Darwin, My 1976 Honda CT70!

Darwin, my 1976 Honda CT70, seems to have a mind of his own! Despite having spent no less than four months at L'Amis Denis being restored he seems rather resistant to the idea of running at all this summer. According to L'Amis Denis, Darwin needed a new carburetor. With the help of a fellow CT70 enthusiast that I met via the Honda CT70 Trail Enthusiasts group on Facebook, I purchased a new carburetor from Phatmx for the princely sum of $93.39 Canadian. They packaged it and sent it the same day they received payment and within a matter of a few days it was at my doorstep waiting to be installed. I am not going to lie to you. I procrastinated about installing it. It's really not laziness but rather an intimidation by most things mechanical. Don't get me wrong, I've GrOwN a pAiR oF NuTs over the last decade and have wrenched on my bikes plenty of times. However, I am always hesitant to start a new project out of fear of screwing things up. I prepared myself by first watching How To Clean The Carburetor On A Honda CT 70 Mini Bike By Don The Small Engine Doctor. His instructions are so detailed that I figured installing a new carb would be half the work and time... or so that was the plan.


It should be noted that Phatmx clearly states that their carburetor, whilst it will work on your vintage Honda CT70, won't be an exact replica of the original. For starters, the intake is larger and the choke and fuel lines are located on the right of the Phatmx carb compared to the original. Furthermore, the throttle input on the top of Phatmx carb won't fit under the frame of the CT70 so you will be using the original screw cap and throttle housing. The process of removing the original carb itself was fairly straightforward and simple thanks to Don The Small Engine Doctor. 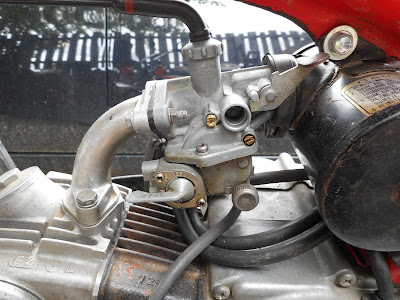 The original carb itself is straightforward to remove. Below is a step by step process on how to do so. However, before you begin, I encourage you to look back to Don The Small Engine Doctor video first. I didn't record myself because frankly, I can't stand the sound of my own voice on film. What Don's video doesn't cover though is the process in installing the Phatmx carb. 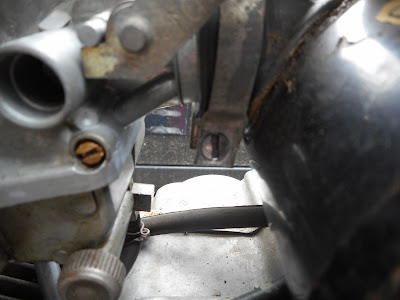 Loosen the clamp that holds the original carburetor in place. The Phatmx intake is larger so unscrew the clamp more than you have to as you will need to make room for the larger rear end of the Phatmx carb. Don't pull it out just yet as you need to complete Step 2 first. I did it in this order because the rubber housing holds the original carb in place whilst you complete Step 2. 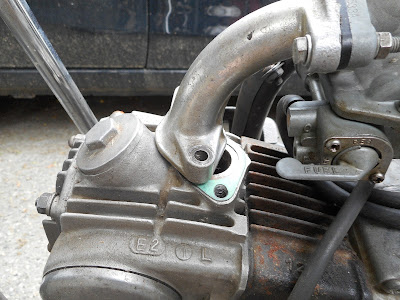 Unscrew the two bottom screws at the end and gently pull the original carb out from the rubber housing (see Step 1). I personally kept the tube on a while longer as it gave me more leverage when manipulating the carb to remove the fuel lines. 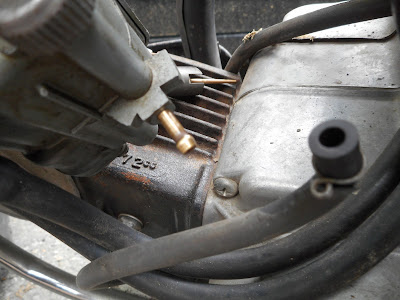 There will be three rubber hoses to remove. The breather hose is the simplest. Gently remove the clamp followed by the rubber hose itself. 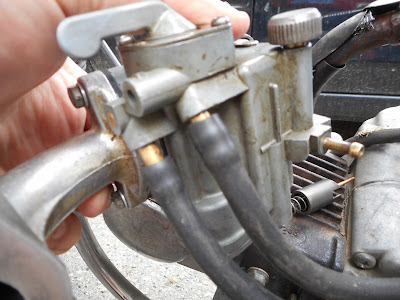 When removing the fuel lines, ensure that a) you have a gasoline canister to pour the excess fuel into it and b) don't get both cables confused. Unlike the Phatmx carb, there are no markings telling you which is the reserve and which is the regular tank. 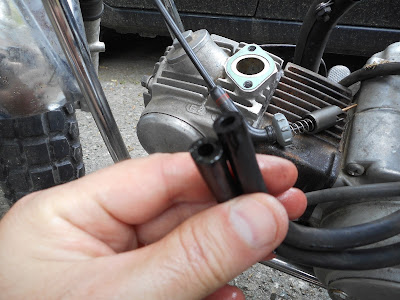 Secure the two fuel lines together and using either a zip tie or similar, ensure that it is out of the way and held upright to prevent any further fuel from dripping all over the place. 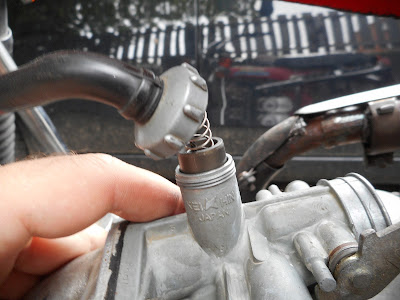 Remove the top cap. Be warned that the components inside will fall out easily. Do NOT remove the throttle cable from the top cap. You will be reusing it as the one provided by Phatmx does not entirely fit under the CT70's frame. 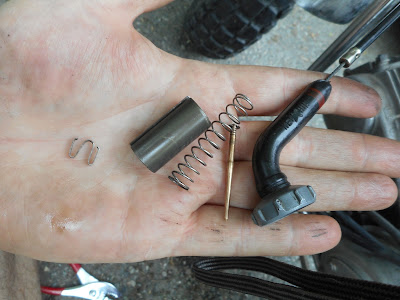 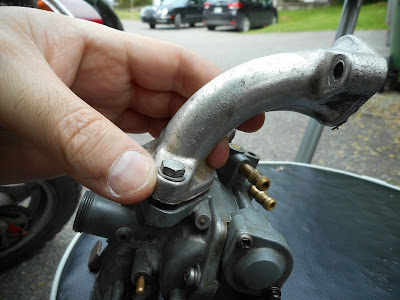 Remove the two bottom small screws holding the tube. Unlike the top two screws, there are washers on both ends so be sure not to accidentally lose them. 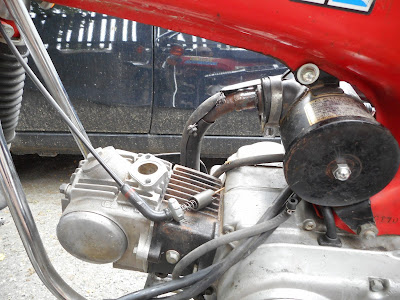 This is a great opportunity to clean the surrounding area and prepare it for the new carb. The spring and carb needle pictured above is from the old carb and was removed in preparation for the new carb. 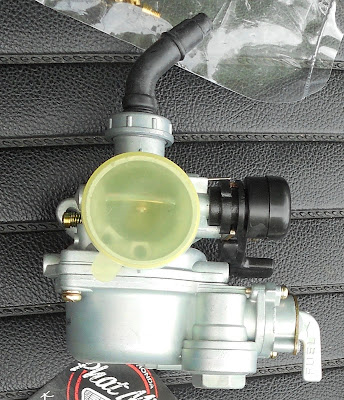 Your new Phatmx carb is manufactured in Taiwan. The choke, fuel lines and settings from ON, OFF, Reserve are all on the right side. I will say from the get go that whilst the Phatmx carb will fit, it's not a perfect fit. 😤 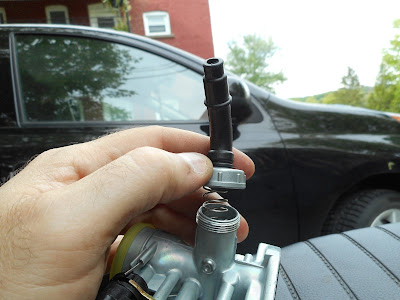 Remove the top throttle cap. As already mentioned above, it won't work in lieu of the CT70's frame being a tad too low for it. I suppose you could bend it, but that seemed counterintuitive to me. Instead, I just used the old throttle cap as it screws right on without so much as a hint of trouble. Furthermore, it saves you the hassle of removing the throttle cable from the original cap which, honestly, I never did figure out how to do. 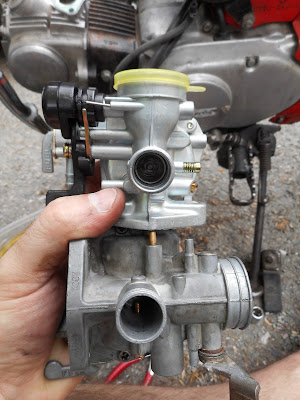 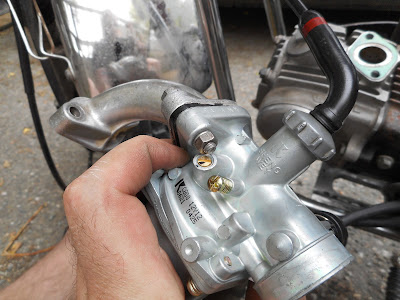 Here the issues become apparent with the Phatmx carb. When reinstalling the above tube you can see that the rear nut inhibits the adjustment screw limiting its potential to raise high by a few simple twists with a phillips screwdriver. Personally, I set the adjustment screw to one and three quarters as recommended by Don. The screw on the right is the throttle screw. Adjust it accordingly once you got the little CT70 up and running again. 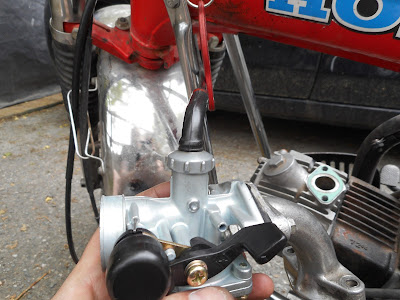 Reinstall the throttle cable with the appropriate components. Remember, the original cap works just fine! You will notice that rubber grommet on top moves freely. That is perfectly normal. 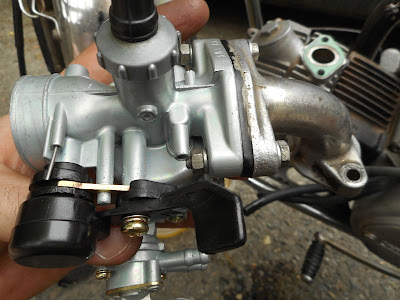 This picture is less of a step but a warning. Again, as was the case in Step 13, you will find that there is very little room to get the rear nut and washer installed for the tube. It takes a little patience and cajoling, but it will work. As you can see there is literally no room left between the nut and the protruding breather from the carb. 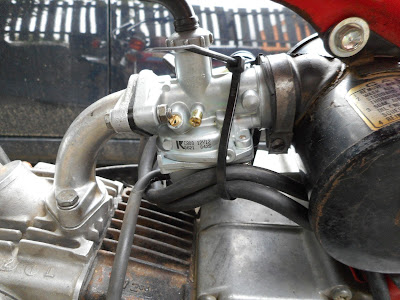 Whilst Phatmx did send me a set of brand new fuel lines I opted to save them for the day that the original fuel lines would need replacing. I ziptied the fuel lines because the new position on the Phatmx carb allows them to lay on the cylinder head. I zip tied them too high and later lowered them further. I also installed the carb during this step similar to the way that Don did with his original carb on his CT70. Start by placing the rear of the carb back into the large rubber grommet at the rear. Tighten the metal clamp (refer to Step 1) only AFTER you have reinstalled the two lower screws and washers at the bottom of the tube connecting the carb to the cylinder head. You will notice that the new Phatmx carb leans slightly more forward out of the rear rubber grommet than the original does. It's not enough to be a problem but is enough to prevent you from lining the aforementioned screws if you tighten the clamp first. 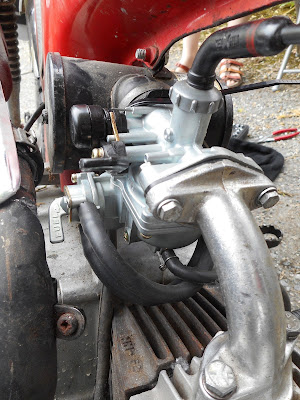 Make sure that the black rubber fuel lines are not resting upon either the cylinder head or the exhaust. Make sure that you set your carb to the ON position. I have read some folks like to add a bit of petrol to the new carb in advance of installation. I did not do this. 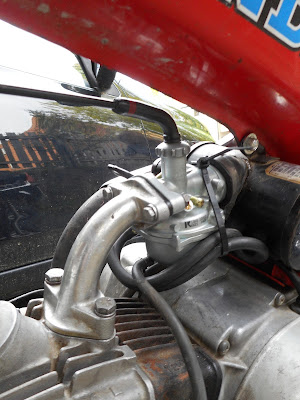 Stand back and admire your hard work! 😄 Make sure that the choke is on (down position on the Phatmx carb), and kick start your CT70 to life. You will have to use the adjustment screw and the throttle screw to get the little bike running just right. Admittedly, it took a while to get Darwin started, let alone running smoothly. Not all CT70s are created equally so figure out what yours prefers and adjust accordingly. 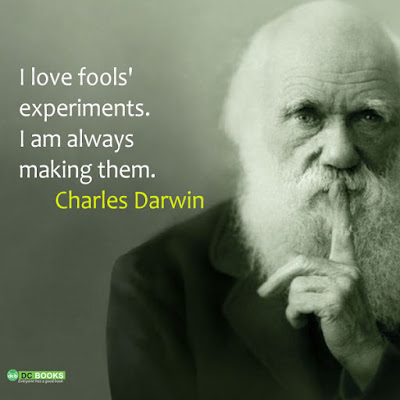 Though it took a while for Darwin to stop sputtering, coughing and wheezing all over the place, when he was running just right I was nothing if not chuffed at how well he sounded compared to when I first picked him up and subsequently was stranded almost twice by him earlier this spring. I hopped on him hoping that this was the big moment I had hoped for back in April. Like an eager black labrador anxiously awaiting to go out, Darwin gently popped forward as I put him into first gear. I proceeded to ride down our driveway successfully completing a uTurn. Unfortunately, the incline seemed to be too much for the little CT70 and suddenly those gremlins returned with a ferocity. Sputtering, coughing and wheezing, Darwin came to an unceremonious stop. I was heartbroken. For nearly an hour I tried to get him running smoothly again. He would start occasionally and in doing so I fiddled with the adjustment screw and throttle screw in hopes of finding that sweet spot again. The issue itself seems identical to the one that had confounded even the mechanics at L'Amis Denis back in April which only served to irritate me. Was it really the original carburetor after all? Was it the Phatmx carburetor? Was it something I did wrong in installing the carburetor? I re-checked everything and all seems to be where it should be. Defeated, Darwin seems to have won again as I find myself scratching my head wondering what could be wrong?! If you have any ideas, please share. Whilst I don't regret buying the Phatmx carb I may buy a rebuild kit for the original carb this winter. Until then, however, I'll just keep plugging away at trying to make him right again.
Posted by Mario RJ Corbin at 7:26 PM