In just over a month of having picked Bella up from storage we found ourselves right back at Rock Moto Sport for my 6000 kilometers (3728 mile) service. To say that she has been the center of my attention is an understatement. 😉 From visiting the Boscobel Ghost Town and meeting up with B.A.C.A. Montreal to see them off on their 100 Mile Run to some Back Roads Therapy with Junkyard Villain and his lovely Harley Davidson Heritage Classic; we have even helped a couple of motorcycle learners by taking them to their motorcycle road exams at the SAAQ! Ownership of my Moto Guzzi V7 Racer has been exquisite. 😍 Indeed, if I had any complaints at all they would be mostly about some of the accessories that I purchased last year. Like any proper motorcyclist, I have also succumbed to purchasing even more accessories for Bella from a very lovely British fellow this spring (It's an addiction, I know). 😜

I have had the opportunity to use Bella in a variety of environments this spring ranging from painfully slow/heavy traffic in Montreal to some back road twisties here in the Eastern Townships and even some spirited riding along some of our more aggressive (read cagers driving way over the speed limit) highways connecting everything not unlike an ethernet does between your computer and your service provider. Suffice it to say, Bella has performed like any other well made machine (arguably better if only because she looks so damn good doing it!). After so many years of researching and looking for a new bike, I still couldn't be happier with my purchase. Given the many, many recalls that major motorcycling companies including Yamaha, Honda and Harley-Davidson have faced over the last few months/years, it begs the question why anyone, anywhere, has ever had a negative thing to say about the V7 lineup. Mechanically the V7 has all the power that anyone could possibly need. I have never felt as though Bella was lacking for power in any real world riding situation. I say "real world" because I know some folks like to use this bike for Track Days where people like to run some of their more exotic or finely tuned motorcycles.

I find the clip-ons quite usable, especially with the Corbin Seat. It's a catch twenty-two really as the Corbin seat lowers me a tad too much whilst the OEM seat(s) give me perfect height but at the expense of a bit of discomfort to my wrists in lieu of the clip-ons. The latter is especially noticeable in heavy traffic unfortunately. During one particular trip into Montreal to accompany a learner to his exam I was stuck in traffic for nearly an hour and a half. 😤 The end result was Bella's clutch cable loosening and requiring adjusting. In fairness, not many bikes would have fared better under such conditions of non stop, bumper to bumper slow moving traffic for over an hour in the burning morning sun. Lane splitting is illegal in my neck of the woods and given how poorly cagers drive here, I wouldn't lane split even if I could. Anyways, the clutch was an easy fix in any case. Whilst I am discussing mechanical misdemeanours I should also point out that during her 6000 kilometre service the mechanic found a small leak in her rear drive. No big deal, they just got the fix in and I'll be bringing her by on Tuesday to have it installed under her two year warranty. In the end, I bought an exotic Italian machine, not a Honda Civic... oh wait. 😏

I recently met a lovely chap from the United Kingdom named Andrew who had several parts to sell. Andrew did the unthinkable and sold his Moto Guzzi V7 Racer for another bike, a Harley-Davidson no less. Fresh from Bella's service, I spent Saturday afternoon adding several of the new accessories to her including some very lovely sounding exhausts from NRP Exhaust of Lincoln. According to Andrew, they make any exhaust to whatever design you want, specialising in classic race bikes! Andrew had the foresight to add a Yorkshire Rose (White Rose of York) to the exhausts. He says that they were actually made for the headstock of a local pedal bike manufacturer! They add a certain je ne sais quoi, don't you think? 😉 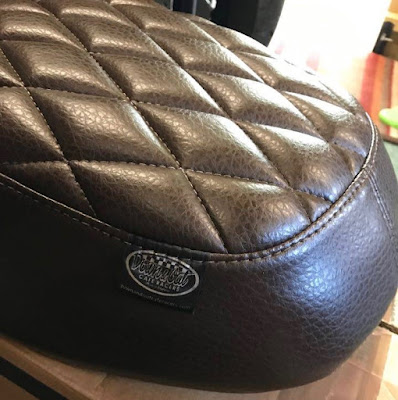 Andrew also sold me an original Moto Guzzi accessory in the form of a Gel Saddle. I had contemplated buying one of these originally but instead opted for the Corbin seat. However, Andrew went one step further and he had it recovered in rich, dark brown, creamy leather by Down & Out Cafe Racers! It's like the polar opposite of a Corbin seat in terms of firmness and has turned Bella into a LA-Z Boy. Whilst not a perfect fit, I managed to even get the original rear cowl to fit the gel seat and thus have returned Bella to her former glory. I took the new pipes and seat for a spin yesterday evening and the new items are really great giving Bella a throaty growl thus allowing more of the V7 Racer personality to shine through. My Old Lady and son will appreciate the added comfort of the gel seat. Both the recovered gel seat and the exhausts are one offs and add to the already exciting direction that Bella is heading. Other accessories include new mirrors, red levers and other goodies that I will tell you more about in a later post. 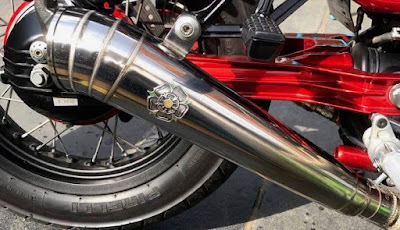 Even with the DB Killers IN, the pipes sound beautiful! 😜
Pic © Andrew Melia 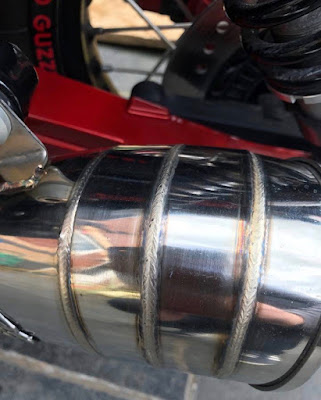 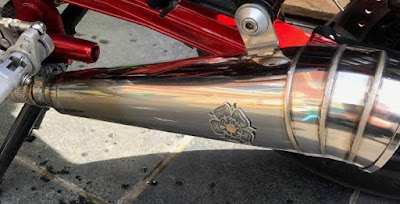 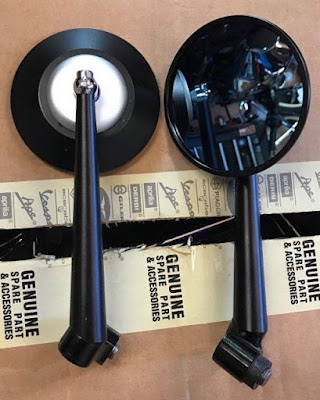 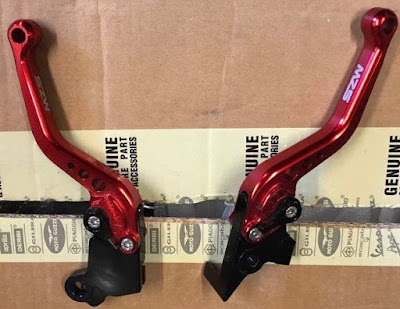 Installed These Yesterday! What A Difference! 😋
Pic © Andrew Melia

If anything, some of the more annoying issues I have experienced during my ownership with Bella has not been with the V7 Racer itself but rather with some of the accessories that I purchased last year. For example, the Bar End Mirror Kit that I purchased from Corsa Italiana! Whilst their customer service is exceptional, the bar end mirror kit itself left something to be desired. 😔 I am hoping that the replacements purchased above will rectify some of the issues otherwise I may return certain parts to their original. Thus, what is more to say other than that Moto Guzzi has made an exceptional motorcycle in the form of this V7 Racer. I know that they have since come out with a V7III but really, if you could get your hands on an original 5 speed V7 don't hesitate to purchase one. Tried and tested, the V7 range continues to be for Moto Guzzi what the Sportster is for Harley-Davidson - arguably their best and most reliable model. Its large fuel tank and shaft drive provide trouble free miles and the torquey engine will keep you smiling even in the most torrential of downpours. A special thanks goes out to Andrew for holding onto the above goodies for me. He gave me a great deal on everything and really, if not for him, I wouldn't have even bothered purchasing new pipes or even a gel seat. But the man's good taste is only surpassed by how kind he is and doing business with him was an absolute pleasure. Now, get out there and ride! 😎

Would you like to be a Guest or Regular Contributor?
Say What? is always looking for quality contributions to our blog!
Contact Us Today!
Posted by Mario RJ Corbin at 5:18 AM