With moving week well behind us, it occurred to me that I've been neglecting Bambi these past few weeks as my attentions were on Bella. It has nothing to do with the quality of one bike over the other, per se, but rather, Bella has been helping me accompany learners in Montreal and the Eastern Townships. To date I have put in and around 900 kilometers (559 miles) on Bambi which admittedly, isn't much. But I am a firm believer in quality over quantity and I am pleased to say that I am still very much enjoying the little SYM Wolf Classic very much. So much so that I decided to take my oldest son out on a ride with me this morning. With no particular place in mind, we set off with a sense of adventure and excitement as we hoped to shake off the past week's flurry of moving, painting and all those other delightful (not) tasks that come with moving.

It was really by chance that I came across the sign for the Musée de l'Ingéniosité J.Armand Bombardier located in Valcourt, Québec. Despite having lived in the Eastern Townships for six years and having been through Valcourt on numerous occasions I had never gone to their museum. If it wasn't for BRP/Bombardier it could be argued that Valcourt itself may have never survived as a small town. As it stands, it's literally a simple little village carved out in the middle of the Canadian landscape. Surrounded by farmland BRP/Bombardier itself is the only thing that adds a splash of colour to an otherwise colourless little town; if only because of the yellow plastic with which Can Am uses to wrap their crates containing their aquatic and snow vehicles and most recently in their history, Can Am Spyder based products. I Reviewed the BRP Can AM Spyder in detail back in 2014 when I worked at Sur 2 Roues. Part of my duties was to teach both BRP employees and customers alike how to ride the Spyder in a weekend course designed to get people motivated to purchase these machines over standard trikes and or two wheeled motorcycles. Licensing for the Spyder still seems wholly unfair in comparison to obtaining a motorcycle (class 6) permit and honestly this may have contributed to my general lack of interest in BRP as a result. 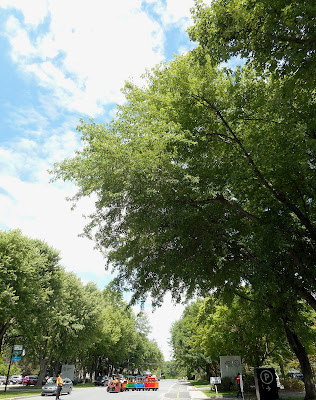 Still, whilst Bambi may be the perfect little modern classic to ride the back roads on, her stock seat leaves something to be desired for passengers as I could sense my oldest son's discomfort by the time we reached Valcourt. I know that Scooterseals sells a variety of accessories for the SYM Wolf Classic including a Vintage Seat. However, it's something that I haven't thought too much about in lieu of the fact that whilst the little SYM Wolf is willing to give it her all, I am not entirely convinced that a passenger would be comfortable for long distance rides. So it was with some relief that my son found himself going for an unexpected visit to Musée de l'Ingéniosité J.Armand Bombardier. Though, unlike the many times before when we had driven past the manufacturing plant, we were surprised to see so many security officers at every entrance. Unbeknownst to us it just so happens to be BRP Bombardier's 75th Anniversary! 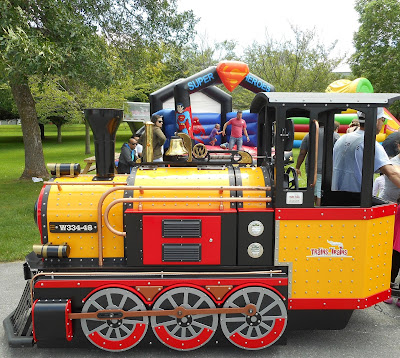 I'd Buy This Over a Can Am Spyder Any Day! 😛

Amongst the festivities were bouncy castles, a miniature train ride for kids (and adults, *cough) and free food. Oh, and the museum too of course. 😊 Entry into the museum was also free, though I am uncertain if that was for their 75th Anniversary or not? As far as museums go, it is actually a very pretty museum. I have to confess I learned many interesting tidbits, not least of all BRP/Bombardier connection and importance to Québec. Don't get me wrong, I knew that the company made planes, trains and automobiles (ok, ok, motorcycles), but I hadn't been aware of the extent to how far their empire reached. Suffice it to say, the story of J. Armand Bombardier himself was one befitting the American Dream.

Admittedly, I enjoyed the Montreal train cars and artefacts the most if only because it instantly transported me back in time to my childhood. I could instantly recall the smell of burning rubber(?!?) as the train cars would come to a full stop and then, move off again. The sound the train would make when departing also echoed in my memory as do the sights of long forgotten faces that are only a blur now. Seeing pictures also remind me of what Montreal once was. McGill Metro station for instance during this period was home to a variety of shops including Eaton's Department Store, The Palace Movie Theatre. Swanson's Ice Cream Parlour was just a few minutes away as was the Magic Pan restaurant. Pictures that are nothing if not haunting as they give you the illusion that you could just simply step into them and visit loved ones who have since passed away. They are windows into time after all for whilst we, here in the present, move forward with our own lives, for a brief moment in history these pictures captured the living like no other technological marvel ever has before in human history. The only exception perhaps are realist portraits made by painters who were in and of themselves the cameras of their time. 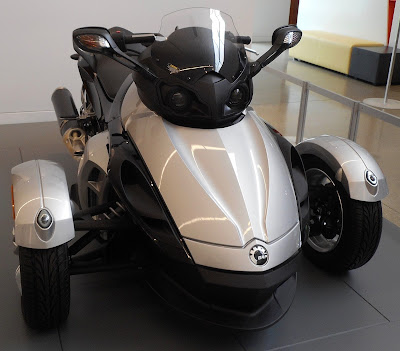 You may be wondering by now where the BRP Can Am Spyders were?! Surprisingly, the short virtual video presentation that the company shares with visitors upon their arrival only dedicated a very small portion of the film to these three wheeled vehicles. As for the actual museum artefacts themselves, I have to confess that I was blown away by some of the concept art on display. From the drawing board to the machine you see above, I have to say I am confused about why they didn't go with something more daring and exciting, not least of all because they had the plans and designers to make it so. Don't take my word for it, see for yourself!

I have to admit, seeing the actual concept art and designs for the BRP Can Am Spyder was rather interesting and all the more disappointing at the same time. They were on the right track in so many ways yet, they decided to play it safe and created the 1st generation of Spyders. I believe that the Spyder is celebrating it's 10th Anniversary this year. Their newest iteration of the Spyder does bring the design aesthetics of the original designers to the forefront more and in particular I can see more clearly now the Formula 1 racing inspiration behind it. Of course, all of this is subjective. According to Consumer Report, despite a 42% mechanical failure rate, people are still drawn to them as they rank as number 10 in the top ten most reliable motorcycles. 😲 They fill a niche market and in doing so allow many to enjoy the experience of riding a motorcycle that driving a convertible just can't offer. I know, I know, I am rather hard on the Spyder and I have covered my reasons for being so in the past. However, I will say that seeing what the Spyder could have been coupled with where technology has come in the last decade leaves me with a sense of disappointment. With companies like Motor Tilting Works, to name but one, making conversions for Harley-Davidsons that allow TRIKES to tilt, and hence, lean into a curve like a proper motorcycle it begs the question why BRP hasn't done this automatically with the Spyder. It would give the vehicle a more natural feel in curves and as well provide customers with a more genuine motorcycling experience. As it stands, and remember, I had to demonstrate emergency maneuvers on these things as a motorcycle instructor, the Spyder still steers like an automobile and not, I am afraid, like a motorcycle. Given the cost of ownership, I still think that BRP owes it to its customers to rectify this. 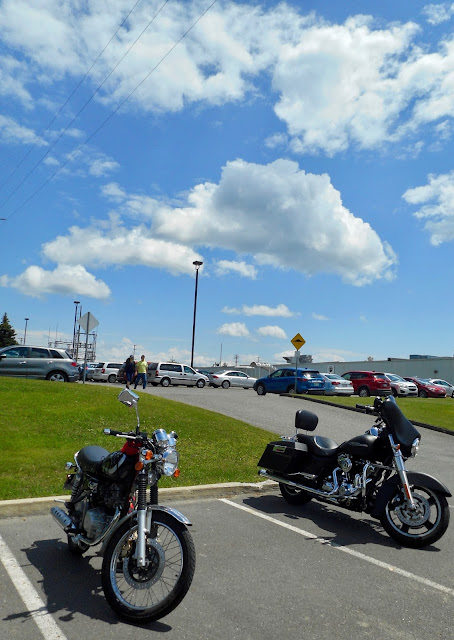 Bambi Getting Acquainted With A Harley-Davidson!

Of course, this doesn't mean I didn't enjoy their other offerings, though I do hope that their aviation department has a smaller failure rate than the Spyder! 😜 I also enjoyed their free food... I mean, what self-respecting biker wouldn't enjoy a free meal? If I am going to be totally honest with you I do think that it's rather ironic really that whilst I am criticizing the Spyder Bambi herself gave me pause for thought today. As if in an act of petulant disobedience, she refused to start and I had to roll down the hill in first gear to get her going. Her electric starter no longer functions though kickstarting her now is much better and she was willing to kick into life upon my request for the remainder of the day. However, in a final act of defiance, her tachometer suddenly began behaving not unlike that poor young girl in the Exorcist. Cheeky girl. 😏 Despite these issues, I'd never give my Bambi up. So why should we knock folks for choosing to ride a Spyder? If nothing else, BRP actually looks like a fun place to work and I wouldn't mind working for them as a test pilot for future iterations of the Spyder or any other goodies they may develop. If anything, I think it's great that a company has managed to take cagers who would normally never even think about riding a motorcycle for one reason or another, and convinced them to jump on a three wheeled convertible instead. After all they can't bloody well text and drive when riding a Spyder now, can they? 😜 That alone is enough to give the Spyder my seal of approval.

Would you like to be a Guest or Regular Contributor?
Say What? is always looking for quality contributions to our blog!
Contact Us Today!
Posted by Mario RJ Corbin at 2:39 PM