From Concept To Skin: Life After Cobra - Inked By Mario RJ Corbin

Feeling reminiscent, my childhood buddy decided to celebrate his 40th year by getting not one but two tattoos today. These were his very first tattoos (ever) and frankly, I think even he was surprised by his need for both of them today. These two tattoos are the beginning of a sleeve that will combine a variety of his passions including, you might have guessed, fishing and GI-JOE. It's just one of many adventures that we have had the chance to share together in a friendship that has spanned no less than 38 years! 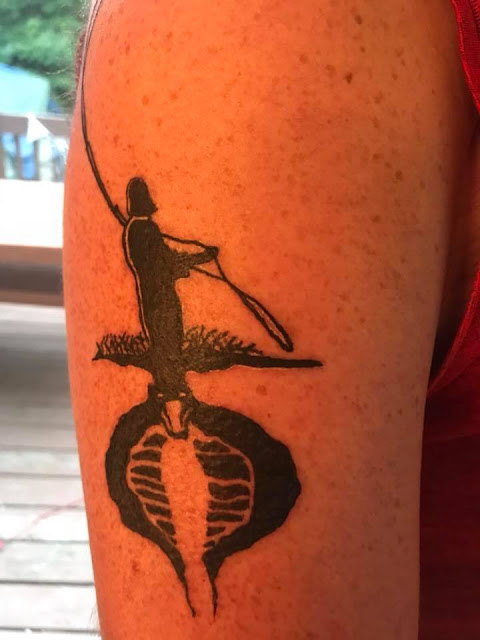 Being the product of the 1980s, when Mike approached me to do something for him we were originally going to do something typical like a Cobra/Decepticon combined logo. However, inspiration seemed to hit us at the same time and instead, we put together a fun little piece showing what I like to call "Life After Cobra". After all, we aren't the only ones who have aged and one has to wonder what would Cobra Commander be doing during his retirement? Being the leader of a world wide terrorist organization can be taxing and what better way to unwind than to find some time to fish?! Or so Mike and I would like to think anyway. Missing is the fishing line but that will be added at the very end when the rest of the sleeve is completed.

Another favorite character of Mike's was Snake-Eyes, a GI-JOE operative who had a long and complicated relationship with Storm-Shadow, a Cobra operative. This particular tattoo was more technical and difficult for me and admittedly, I can already see some areas for improvement. The latter will be done during our next session in a month or two when touch-ups are completed. Either way, the experience was fun not least of all because it gave Mike and I the opportunity to catch up. Despite living two hours apart our busy lives essentially means we only get to see one another every two years or so!