To say that I am not a car or truck guy would be fair. The only vehicles that aren't motorcycles that I enjoy are classics, hence why I purchased Bertie, my 1972 VW Bus whom is still at the shop in case you were wondering. I needed something that would be fun, practical and usable in winter as some of the country roads in my neck of the woods is squirrely at the best of times in winter. I wanted something that would be fun a la Honda Africa Twin if we ever decided to do some light off roading and camping. Something that I could throw a couple of kids motocross in the back or maybe even a kayak. Something I could go camping with or like most people, a practical vehicle that will save me money on renting trailers from U-Haul or shipping costs when we go to IKEA or Costco. I know that Jennifer already has plans to visit the garden centre this spring! In short, I needed something that would serve us well should the Zombie Apocalypse come to fruition but that could blend in seamlessly in the meantime as to not draw suspicion of our fears of zombies in general.

In Canada (always more expensive here), I bought our lightly used 2017 TRD Sport with just over 20, 000 miles (38, 000 kilometers) for $28, 300 USD ($38, 500 CAD) from Sherbrooke Toyota. The various models are difficult to piece together and some subtle changes have been made every year since the 3rd generation was released in 2016. Add to the fact that Americans get more choices and so far, it's been challenging trying to figure out the differences in package trims. Even Sherbrooke Toyota listed my truck as a Toyota TRD Off Road on the sales form. It's actually a Sport. This is what I pieced together so far. My truck is technically a 4X4 Double Cab V6 6A.


There are also door sill protectors, all weather mats, and weirdly enough, two extra cup holders in the rear of the truck. I say weird because that brings the total tally up to 13 bottle/cup holders! I'm not really sure why or how anyone could possibly use that many bottle/cup holders in anything other than a 13 seater bus, but there you have it. In addition to my many bottle/cup holders I also managed to negotiate that the truck come with a set of brand new winter tires (legally required in Quebec). Sherbrooke Toyota will also throw in paint protection film and anti-rust to help combat the cold Canadian winters. Best of all, the truck also comes with with an extended Toyota Platinum Warranty package valid until 2021. I considered going new but this truck, with everything that is on it would have made the sticker price jump up to $39+ USD ($53+ CAD) before taxes! So all in all, I am quite pleased with the purchase price that I paid! 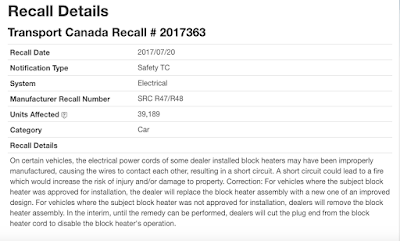 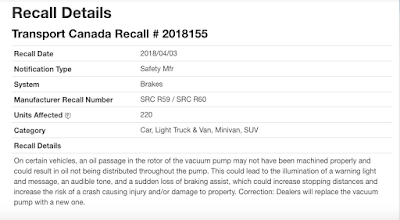 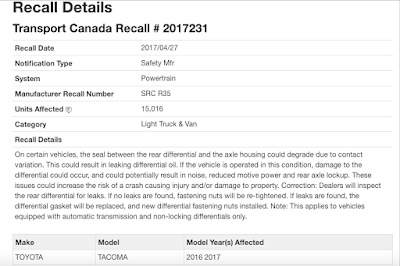 To date the 2017 Toyota Tacoma has had three recalls in Canada. Only two might apply to my truck as it does not have the block heater. I will be checking in with Toyota tomorrow to see if the other two were already fixed or if it was ever a problem on my particular truck. If you own a Canadian 2017 Tacoma visit Transport Canada's Website for further details. Like any kid with a brand new toy, I have read everything and anything about the Tacoma since the 3rd generation was released. I even found myself reading about 1st and 2nd generation issues to see if they had carried over into the 3rd gen. It brought me back to when I was doing research on Bella, my 2014 Moto Guzzi V7 Racer. For every person that loved the bike there was another who complained. The same is true of any vehicle, including the Tacoma. Some of the complaints are justified of course whilst others, well, let's not go there. Sherbrooke Toyota even provided me with my Tacoma's CarFax. I know, I know, even that is argued to death about its validity. However, what I do like about it is that it clearly shows that my Tacoma had been serviced properly. The vehicle was leased, not purchased, in the summer of 2017 so the previous owner had followed Toyota's maintenance schedule.

Naturally I took the Tacoma for a test drive that covered both in town and highway. I found that the automatic transmission was similar to that of our 2016 KIA Rondo. I can understand and appreciate what many folks are talking about regarding the automatic transmission box. However, I didn't really feel that this truck was behaving in the same manner that so many have complained about. On the contrary, actually. It has very good road manners and surprisingly, felt more like driving a car or SUV than a truck. Cabin noise was minimal and overall I found the engine to be quite responsive. Of course, a test drive is just that, a short period of time intended to give an impression of handling characteristics. So time will tell. However, that being said, it should be noted that the speed limits in Quebec are very conservative (max speed is 60 miles (100km) per hour). Overall, build quality felt great all around with one exception. The interior plastics used to build Toyota vehicles are not as refined as Honda or even Kia. It's like a throw back to when my mother purchased her brand new 1986 Toyota Tercel in terms of quality. I find it forgivable in a pick up truck because, in my mind, it's meant to be a utilitarian vehicle. No point having leather seats and a soft touch dash if I am planning on going off road or if I want to put my two german shepherds in the back seat. The Inferno coloured trim was a fun touch and helped liven up an otherwise dark cabin.

I had looked into purchasing a used pick up truck for years but people just beat the shit out of their vehicles and have no regard for maintaining them, particularly 4X4's. We live in a throw away culture and these trucks are no exception to that rule. Sure, some folks take care of their vehicles but if I am going to pay near new prices, I may as well buy new or lightly used with factory warranty. All I really wanted was a mid-size pick up truck with sunroof a la Back to the Future (1985). This truck has more bells and whistles than I will ever need (or use), but promises to be a fantastic addition to our family. The dual environment controls alone will be great as my wife and I have different ideas about cabin temperatures. I will leave it at this by saying that I have done my homework and I look forward to picking Garfield up this Friday!
Posted by Mario RJ Corbin at 7:49 AM