Ye Olde Cock Tattoo Emporium is moving! Situated on the Circuit des Murales de Sherbrooke, our new shop sits outside one of Sherbrooke's better-known murals (see above). This past year has been absolutely amazing as I have had the pleasure and honour of working with so many great clients. I am especially chuffed that all my work has been with returning clients and has been mainly sleeve work. However, don't let that stop you from contacting us today to set up an appointment for smaller pieces. We are looking to expand, albeit modestly, and the new shop will also be selling an eclectic assortment of goods and products over the course of the next few months. Thus, whether you are looking for a new tattoo or if you just want to stop by for a coffee and purchase some goodies, be sure to check us out. In the meantime, here are a few pictures of the new shop:
Read & See More »
Posted by Mario RJ Corbin at 3:02 PM 5 comments: Links to this post

The topic I chose for my body modification project was hair. I chose this topic because this is a body modification that we tend to do very often in our daily living. Everybody either gets a haircut or dyes their hair at one point in their lives. I interviewed a hairdresser from my hometown to ask her a couple of questions about her career. The person that I interviewed name is Shanie Charest-Lussier. She works at a salon in East Angus that is called Espace Beauté which doesn’t only include hairdressing but also a tanning salon, massage therapist, eyelash extensions and esthetician. I am only focusing on the hairdressing part of the salon. The interview took place at the salon while she was doing my hair. The aim of this interview was to find out more about this body modification and what it means to certain people. I chose Shanie because she was recommended by two of my family members, my mom, and grandmother. They told me she was committed to her work and she would give her opinion on what she would think about what type of hairstyle would suit you. She is the type of person that loves her job at any moment. After interviewing her, I’ve noticed that she is very open and she loves talking about her job. I will be explaining how the interview went and what she has answered my questions.
Read & See More »
Posted by Mario RJ Corbin at 7:06 AM No comments: Links to this post

Clothes. Probably one of the simplest, most basic forms of body modification. Still, some people don’t choose to use clothing and fashion to solely express themselves. Véronique Boislard, an artist, painter, and clothes designer, uses style and clothes to not only self-express but to send out a crucial message about environmental conscience. Native to the Estrie region, she has shared her talent and life philosophies with schools, symposiums, and art shows. Véronique also has a complex background in interior design as well as painting murals. She currently resides in Danville, Québec, where you can visit her boutique, Dékov Art & Design. You will find beautifully hand-crafted clothing, pottery, jewelry and art of all sorts, all made locally by herself and various other artists. Véronique was the perfect participant for this interview; she revealed her inspirations, her experience as an artist and her relentless mission to spread environmental awareness. During this interview, I wanted to explore two specific aspects: her thoughts on fashion and their enabling of individuality and the importance of keeping the environment in mind while doing so.
Read & See More »
Posted by Mario RJ Corbin at 6:35 AM No comments: Links to this post

Read & See More »
Posted by Mario RJ Corbin at 3:46 PM No comments: Links to this post

Skin Deep: Social & Cultural Perspectives on Body Modification was designed to introduce students to a variety of social and cultural narratives surrounding various forms of body modification. The human body is a cultural body and we cannot escape the markers in any given society that force us to conform to ideals of beauty; mark membership in a group; mark social status, or convey personal information about your own values and beliefs. The latter not only shapes our bodies and minds but our understanding of what is and what is not acceptable. Drawing from various cultures around the world this course explores the history of body modification and examines the impact it has had on contemporary societies. This course has challenged students existing perceptions and helped them develop empathy towards other groups. This course has drawn heavily from (but is not limited to) cultural anthropology, sociology, history, media studies, and world geography.

Teachers all over the world have been experiencing what is referred to as “teacher/academic mobbing”. Teacher mobbing, as defined by Cemaloglu, is the “unethical and hostile way of communication that is systematically applied by one or more persons” (2014) however after reading several case studies, it is also defined as a serious psychological attack on a teacher’s self-esteem and confidence and can affect the individual in many negative ways (Peker, Ilandi, Gilic 2018). Such mobbing actions happen at an increasing and rapid level to phase the person out. Many different portrayals of mobbing include; the teacher’s voice, ideas or opinions being ignored or interrupted, having their achievements unrecognized, purposely excluding the individual, giving too many tasks or even work that they are over-qualified for, constantly controlling or reminding them of their mistakes, and lastly, publicly humiliating or having rumours spread (Cemaloglu 2014). The PMC, also known as the US National Library of Medicine, confirms that traditional targets in the academic system are usually the most successful, are popular amongst the students or speak out against the system (Khoo, 2010) and Faria, Moxin Jr., and Salter agree by also adding that teachers with tenure are practically immediate targets of bullying as well (2012). Several case studies done throughout North America and Turkey have concluded that victims of academic mobbing, while still at work, suffer from physical issues such as “chronic fear and anxiety, (…) fatigue, headache (…) absence from work” (Cemalolgu, 2014). Once the individual goes through depression that is lead by “organizational alienation” (Peker, Inandi, Gilic, 2018) most of them end up burning out if they haven’t already left and there have been few cases of professors committing suicide as well.

Read & See More »
Posted by Mario RJ Corbin at 12:32 PM No comments: Links to this post 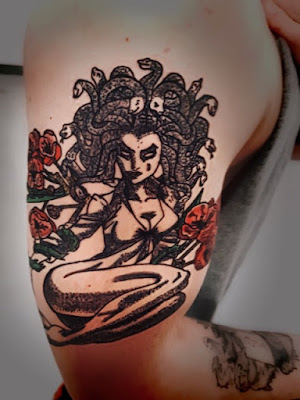 Part two of Jesse’s sleeve complete, this lovely pin-up came together quite nicely I think. What’s more, is that Medusa’s legs look like they are moving when Jesse flexes his arm! An unintentional but welcome trick of the eye for this Norse & Greek mythological sleeve that we are working on. The cherry blossoms add a nice contrast and represent rebirth to Medusa’s eternal gaze. This is the last tattoo that I will be doing until April as we are moving to a new studio! Thus, if you are looking to get some ink don't hesitate to contact me today!
Read & See More »
Posted by Mario RJ Corbin at 7:42 PM No comments: Links to this post

QUEBEC PAST AND PRESENT: 7th COLLOQUIUM ON QUEBEC STUDIES March 29 and March 30 2019 at Bishop’s University.

The Eastern Townships Resource Centre (ETRC), in collaboration with the Institute of Quebec Studies located at the State University of New York (SUNY) in Plattsburgh, will hold its Annual Quebec Studies Colloquium, entitled “Quebec: Past & Present,” on March 29 and March 30, 2019, at Bishop’s University. This event will be dedicated to exploring several facets of past and contemporary Quebec society, from increasing nationalism and multilingualism to the role this province plays on the international stage. Presentations about the province’s history and current indigenous affairs are equally part of this year’s program. We are proud to welcome established researcher and promising students from 11 different academic institutions in northern America on our university’s campus.

The event is free and everybody is welcome. For more information about the venue and the program please visit: http://www.etrc.ca/colloquium
Posted by Mario RJ Corbin at 7:05 AM No comments: Links to this post 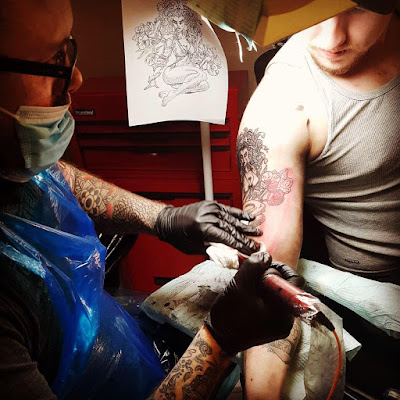 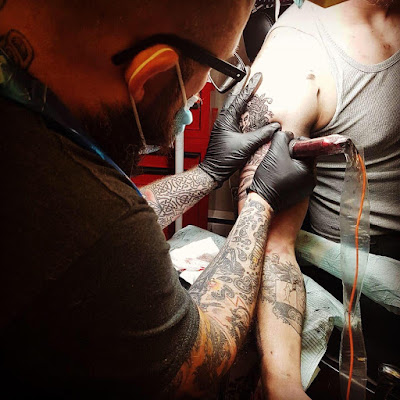 Just a little preview of a Norse/Greek sleeve in progress. This has been an amazing experience thus far and a really fun piece to work on and I am looking forward to revealing the finished product once it is complete! In the meantime, if you are looking to get some ink don't hesitate to contact me today!
Read & See More »
Posted by Mario RJ Corbin at 6:31 PM 2 comments: Links to this post

From Concept To Skin: One For Sorrow - Inked By Mario RJ Corbin 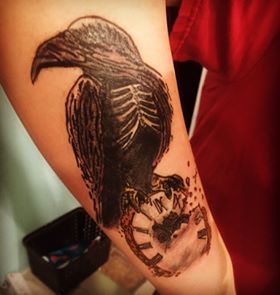 This is part three of a life and death-themed tattoo sleeve. Previous installments include a zombiefied Jackalope (click to view) and decaying fox with an evergreen sapling growing out of it. More to come including some interesting fillers for this otherwise macabre sleeve.
Read & See More »
Posted by Mario RJ Corbin at 6:14 PM 2 comments: Links to this post